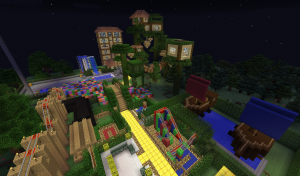 The press, educational and architectural professionals have really picked up on the applicability of Minecraft as a vehicle for public interaction. We have collected a short list of articles and mentionings of “applied Minecraft”.

Across global media it has been demonstrated, what impact a platform like Minecraft can have when applied creatively.
“Denmark in Minecraft” was launched by Geodatastyrelsen (Danish Geodata Agency), conceived, developed and operated by Simon Lyngby Kokkendorff, Thorbjørn Kjærshøj Nielsen and Nynne Sole Dalå, the founders of GeoBoxers.

David Crookes The Independent
Minecraft is much more than ‘Lego online’ – it’s a creative classroom tool … It has transcended into real-life like no other game before, having a positive impact on key areas as diverse as urban redevelopment, mapping, history and the arts.

Crookes David Crookes is a journalist, author, exhibition curator and communications manager.
Chelsea Stark is the Games Editor for Mashable, where she covers everything from AAA titles, mainstream consoles, indie gems, mobile games and gaming culture. She handles news, feature stories and reviews.

Chelsea Starks Mashable
But before the project began and workers picked up tools, community members were asked to pick up a keyboard and mouse and reimagine this park inside of Minecraft.

Belinda Lanks Bloomberg Businessweek
It is what’s known as a sandbox game, one in which players roam around at will, rather than passing through levels in sequence. That also makes it a perfect platform for showcasing the topographical data that the Danish Geodata Agency has amassed on everything from buildings and roads to statues and lampposts.

Belinda Lanks is the design editor of Businessweek.com.
BBC News should not require any further introduction…

BBC News BBC News
Danish residents are urged to “freely move around in Denmark” and “find your own residential area, to build and tear down”. Around 50 million copies of Minecraft have been sold worldwide. Known as a “sandbox” game, the title allows players to exist in a virtual world, using building blocks to create everything from basic structures to entire worlds.

Block by Block
Mama Lucinda, 78-year-old Lima resident and long-time advocate for neighborhood improvements, used Minecraft to design a new public space along with her neighbors. See her vision and the work to date!

The Block by Block Foundation  empowers communities to turn neglected urban spaces into vibrant places that improve quality of life for all.
Motherboard is traveling the world to uncover the stories that will define what’s coming next. New technologies, cultures, and discoveries are constantly reshaping this old planet of ours. And it’s happening faster than ever before.

Victoria Turk Motherboard
If you can imagine it, there’s probably Minecraft of it. Since the blocky sandbox game was first released, we’ve seen a stunning array of user creations, from haunted mansions to functioning computers and, yes, lots of phallic structures. But this has to be one of the best creations in terms of scope: the whole of Denmark. Devin Coldewey NBC News
The game map is based on real, official measurements made public by the Danish Geodata Agency, though various things have had to adapt to the game’s scale and, naturally, its blocky graphics. The scale is about 1:1, meaning virtually walking across the country could literally take days.

Coldewey is responsible for original reporting on a number of tech topics, such as photography, biotechnology, and Internet policy. Coldewey joined NBCNews.com from TechCrunch, where he was an editor covering a similarly wide variety of content and industries.
Gizmodo is a trend-setting technology on-line magazine, followed closely by millions. Estes is a Senior Writer at the magazine
Adam Clark Estes Gizmodo
No seriously, all of Denmark is now in Minecraft, and it’s there to send the public a message about big data and transparency. The Danish Geodata Agency used a vast quantity of geographical data and information about the built environment (houses, roads, parks, etc.) to construct a near perfect replica of the entire country.

But we’ve never seen anything quite like this. As you can see in the video above, the Danish Geodata Agency has completely mapped out the entire country of Denmark in a 1:1 scale and released it to the public….the two men behind the project are Simon Kokkendorf and Thorbjørn Nielsen. Kotaku says the two men want to use the impressive model for educational purposes — like teaching students about urban planning and that sort of stuff.

Taylor Casti is a games fellow with Huffington Post’s Tech team. When she’s not writing articles about tech, social media, and gaming, she can almost certainly be found on her couch with a controller in hand.

YouTuber RE:roll (aka Angus Morrison) released Part II in the three-part documentary “Why has my Mom Heard of Minecraft?”, both parts contain interviews with GeoBoxers’ Simon and Thorbjørn.

RE:roll in the series introduction: “The press try their best to explain Minecraft to parents, but they’ve rather missed the point. It’s not about blocks at all…”

In search for answers, RE:roll asked Brian Alspach from qCraft and E-Line Media, Jacob Granberry and Will Blew from WesterosCraft and Simon and Thorbjørn about their fascination and motivation for using Minecraft.

“Why has my Mom heard of Minecraft? A Documentary. Part I”:

“Why has my Mom heard of Minecraft? A Documentary. Part II”:

Two videos about Denmark in Minecraft: